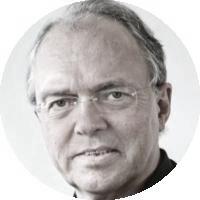 Professor of Methodology and Integrity, Department of Epidemiology and Biostatistics

Lex Bouter obtained a MSc degree in Medical Biology at Utrecht University in 1982, he lectured at teacher training colleges in Tilburg and Utrecht.  In 1984 he joined Maastricht University, where he was trained as an epidemiologist and obtained his PhD.  In 1988 he published a textbook on epidemiology, the seventh revised Dutch edition of which appeared in 2016 and the first English edition in 2018.

In 1992 Bouter took up a tenured position as Professor of Epidemiology and became Scientific Director of the EMGO+ Institute for Health and Care Research at the VU University Medical Center in Amsterdam (1992-2006).  From 2006 until 2013 he was Rector Magnificus and member of the Executive Board of Vrije Universiteit Amsterdam.  In this function he focused on combining research groups in interdisciplinary research institutes.  Also as rector Lex pleaded for attention for the societal impact of research.  And for attention for the dilemmas around scientific integrity.

Subsequently Lex prepared for a return to science during a sabbatical leave.  In 2014 his tenured professorship was broadened to Methodology and Integrity.  He is currently involved in teaching and research regarding responsible conduct of research, questionable research practices and research misconduct.  In 2017 he organized and co-chaired the 5th World Conference on Research Integrity in Amsterdam and became chair of the World Conferences on Research Integrity Foundation.

Lex Bouter is author or co-author of about 700 scientific publications contained in the Web of Science, which have been cited about 50,000 times.  He is listed among the 400 most influential biomedical researchers and has supervised 74 PhD students, of whom to date 15 were appointed as professor.

It has become increasingly clear that – on the aggregated level – the impact of questionable research practices (QRP) is much larger than that of the classical ‘deadly sins’ of fabrication, falsification and plagiarism. Responsible conduct of research (RCR) concerns the behaviour of scientists.  They are guided by the ‘moral compass’ in their head.  A number of stakeholders have a role to play in keeping the moral compass stable and pointing in the right direction.  The most important stakeholders are the scientists themselves.  They bear the responsibility for maintaining research integrity in their own work and that of their colleagues, first and foremost the PhD students and others they supervise or mentor.

But the moral compass of scientists is of course strongly influenced by what happens in the environment.  The big picture seems to be that scientists experience dilemmas and conflicts of interest in daily practice that arise from the fact that what is good for the validity and reliability of science is not always good for their personal career.  Many rewards are linked to having positive and spectacular results as these are published more easily in high impact journals and will be cited more often.  The various QRP have in common that they can effectively help to get these positive and spectacular results.

Both in the local research climate and in the system of science at large important determinants of RCR and lack thereof can be identified.  Sadly, some of these can act as a perverse incentive and lead to QRPs or worse.  Empowering the scientist and optimizing the incentives for RCR is the task of the other stakeholders.  They should together make it more easy for scientist to keep their moral compass tuned correctly and to live up to the standards of research integrity.  We need to recognize that research institutions, funding agencies and scientific journals can and should take measures to foster RCR and to detect and handle instances of major or minor research misbehaviors.

Research institutions have a duty to have clear codes and procedures regarding research integrity, and to ensure good facilities, adequate mentoring, and training in RCR at all levels.  Specific arrangements must be made to enable transparency and to monitor research quality, like good data-management and –storage facilities, adequate methodological and statistical support, and a system of internal audits.  Institutions should tackle the perverse incentives in their reward system and promote a research climate in which dilemmas can be openly discussed and learning from mistakes is encouraged. Institutions may decide to explore the salient aspects of their research climate and identify promising ways to promote responsible conduct of research by consulting their community of researchers.

At the end of the 5th World Conference on Research Integrity, May 2017, consensus was reached on the Amsterdam Agenda that says: It is now time to place greater emphasis on the assessment of efforts to improve integrity in research and the use of empirical information in developing research integrity policies.  Following that lead measurable outcomes will be proposed for the actions research institutions take to foster RCR among their scientific staff and examples of the use of these outcomes will be given.